As spring starts to set in there is hope for all those still covered in snow! But, why not watch a Golden Retriever named Buddy enjoying the snow in slow motion:

You can see the individual snowflakes settling on his fur! 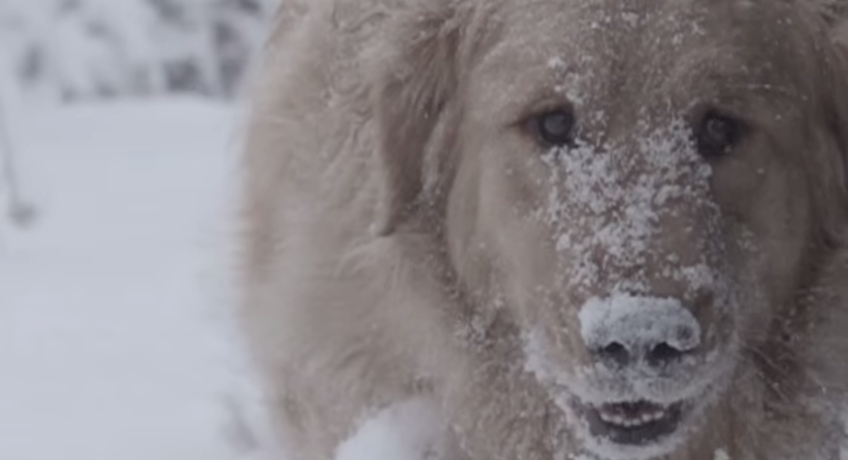 Just look at the floppy face and ears, and the way he seems so content! 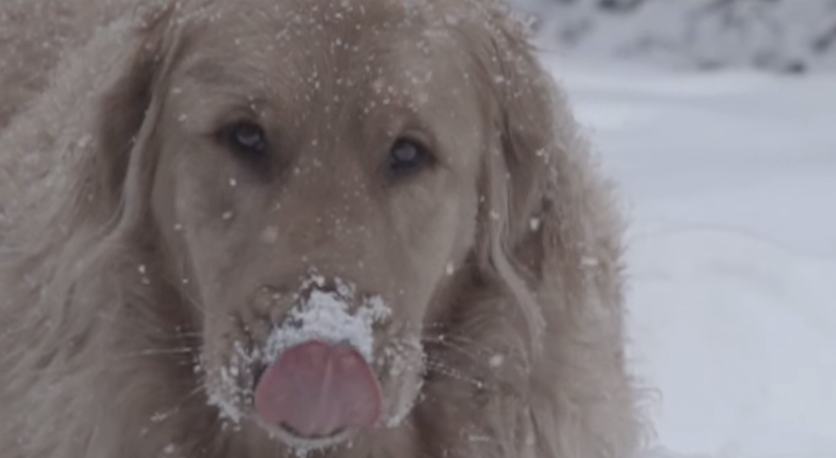 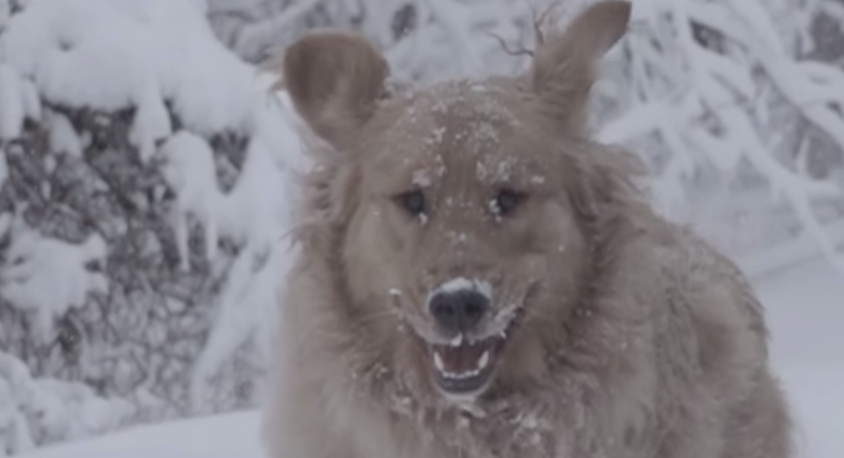 If only I could enjoy winter like that. The video is equal parts soothing and causing me to want to run and romp in freshly falling snow.

There is a lot of snow in Detroit Michigan, and their red panda was out to enjoy it: 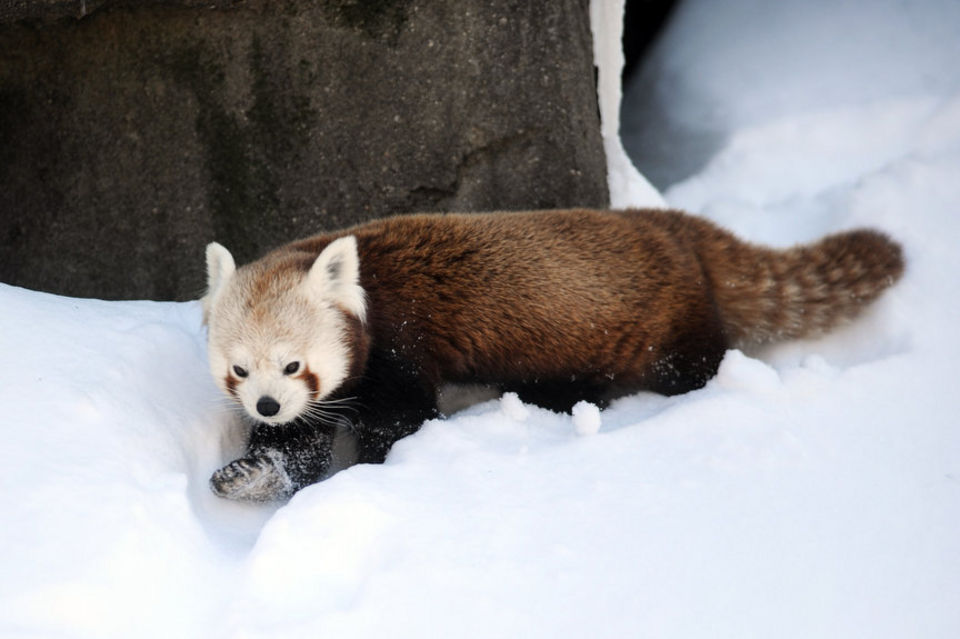 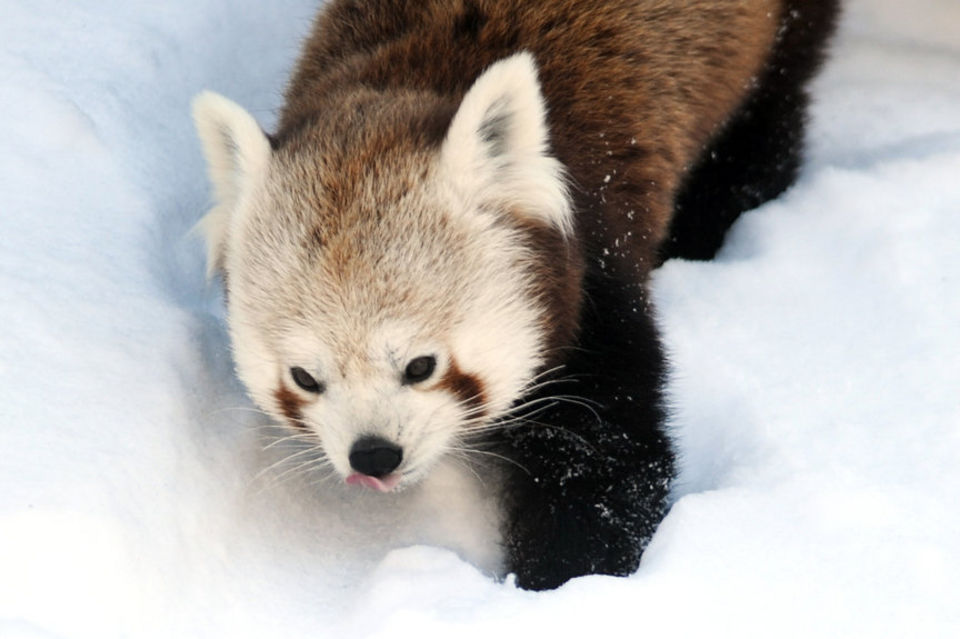 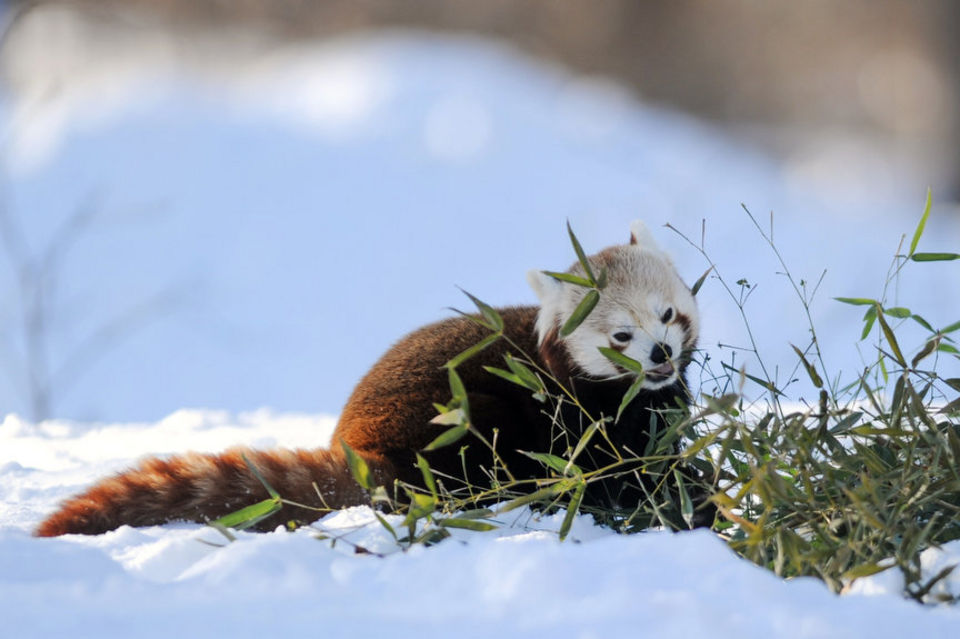 So cute, just look at that fuzzy face! It is wonderful to see something enjoying the snow! And if you don’t live somewhere that has snow, it is not always that enjoyable.

At the national zoo the animals are enjoying the snow!

Where the human lives the snow has taken over for the time being, and staying home is the best remedy for the cold and dangerous roads. Take a look at these animals having more fun than my human is! 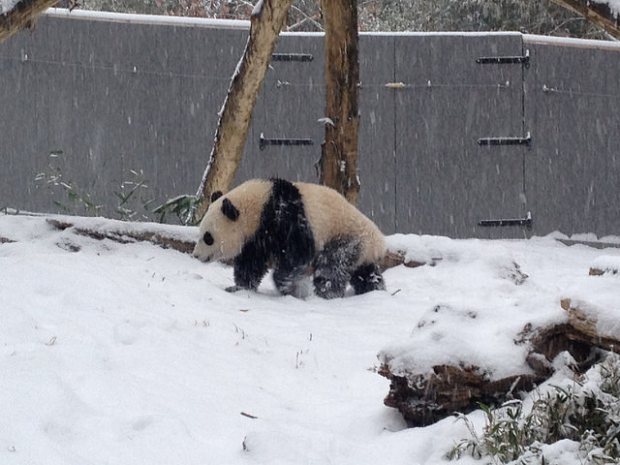 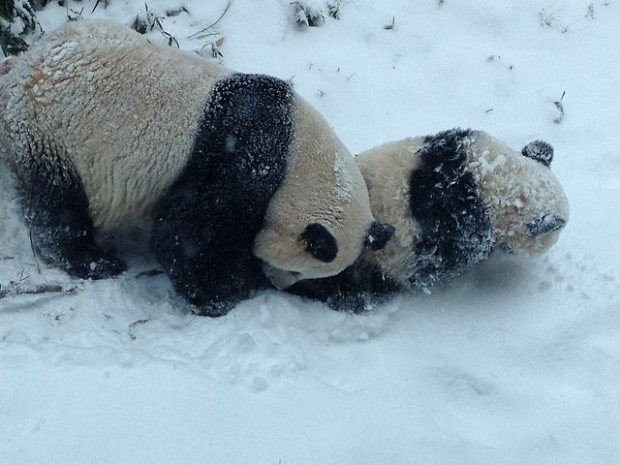 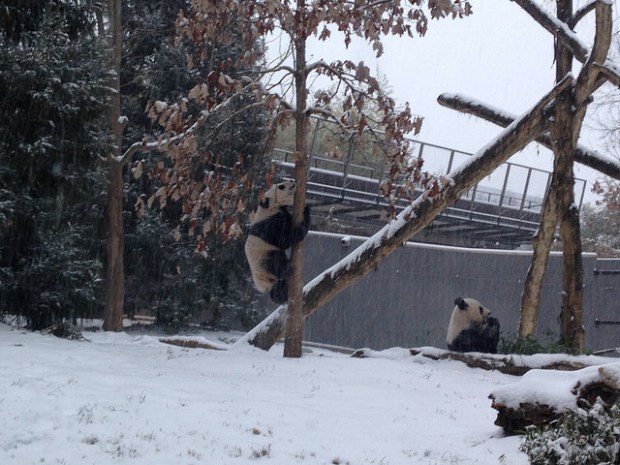 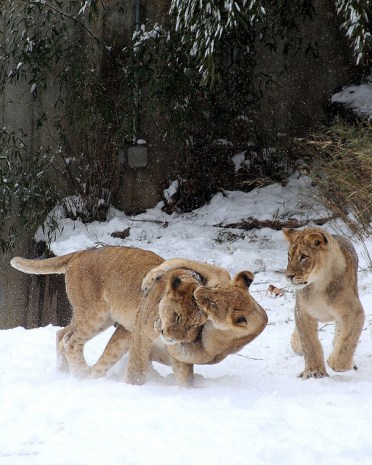 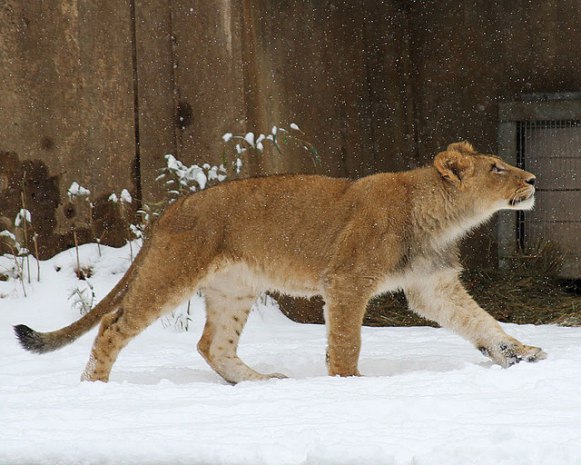 I would not have expected Afrcan Lions to appreciate snow! But I suppose they would get used to it living at the National Zoo where it is a fact of life in the winter.

The regal beauty of Sumatran Tiger Sukacita enjoying a walk in the snow: 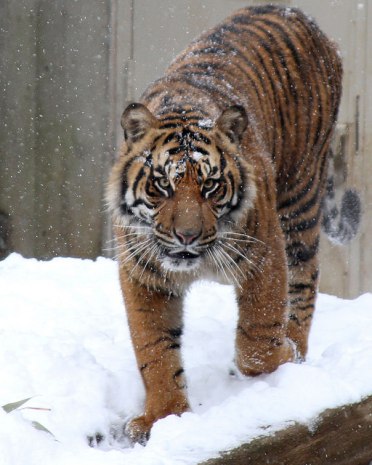 Rona the Grey Seal with a face full of snow: 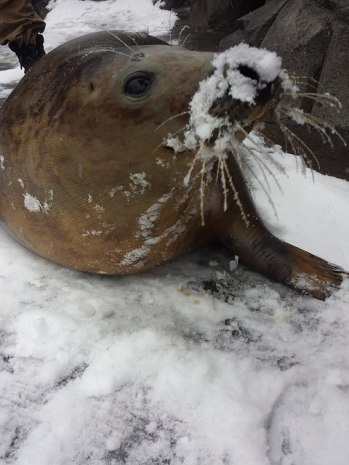 Hope you are all enjoying sunshine, staying warm, or are having this much winter fun!

Is it snowing where you live? Here there is so much snow, so early, that kids had snow days already!

No matter if you have snow now or not, watch this Panda at the Toronto Zoo enjoying the winter weather: 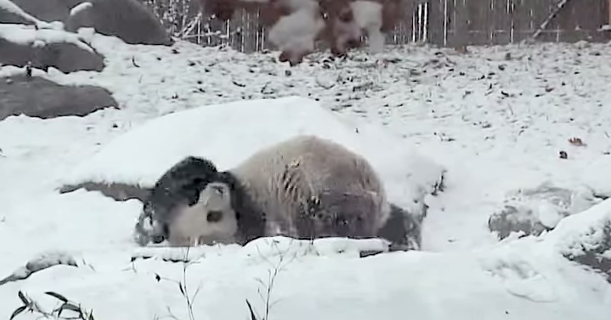 I am glad that he is enjoying it!

Wednesday again! The winter seems to continue forever here, but spring is around the corner. Just have to make it…

Here is a German Shepherd and Collie Mix named Arya who looks beautiful in the white snow: 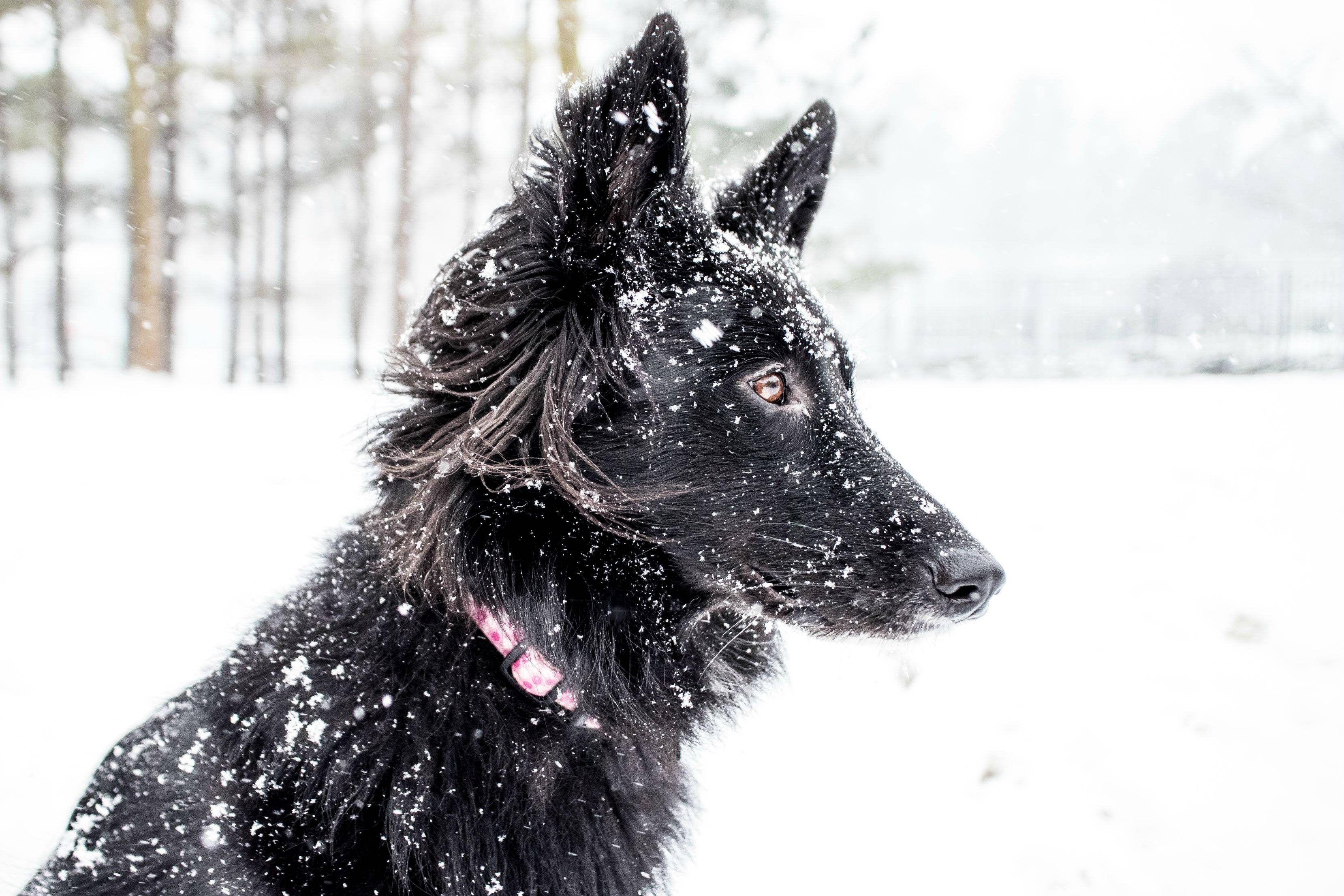 And another shot of Arya, from the original source on reddit: 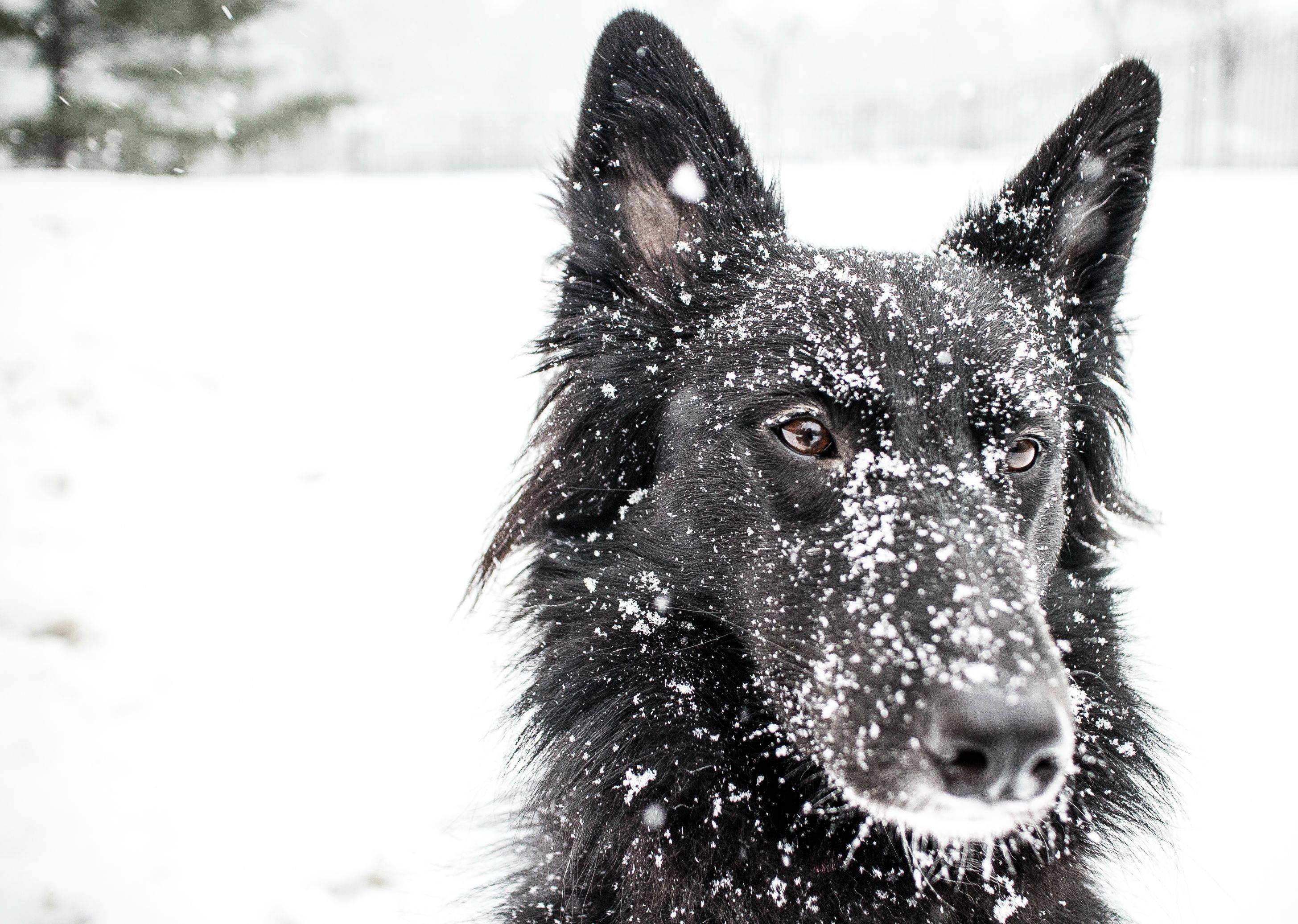 The black fur offset from the white snow makes the composition of this picture wonderful. Hope these pictures help any of you under at ton of snow like we are here at FT!

I hope that this little guy makes you feel a bit better today if it is too hot where you live! 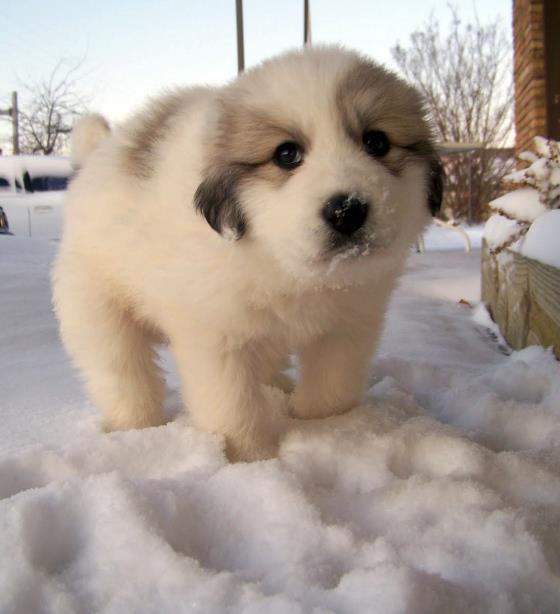 So fluffy! The snow on his nose just makes the picture even more adorable.

We had a snow day where I live, a storm dumped a lot of packing snow on top of the snow we already had on the ground. I could not let all that snow go to waste! I decided to make snow guinea pigs instead of snow men.

In retrospect, I could have done a better job with better supplies. I do not own snow pants or water proof gloves so I was not prepared to be outside for a long time and the snow kept sticking to my gloves so it was hard to sculpt. I also did not have anything to move a lot of snow or forms (boxes, bucket, etc.) to pack snow into to make a base to begin sculpting from. But I had a lot of fun and investing in such items would be worth it to prepare for future winters.

Here are the results of my snow day adventure:

The hardest part was getting far enough into my yard, the ruler in the picture fits all the way into my footprint. It was almost up to my knees in certain places but I feel like this picture gets the idea across.

I started by sculpting a guinea pig out of snow to look like my English pig Fizz.

Here she is in snow:

It was incredibly difficult to take a good picture of her where she was located and with the sun and shade, so I increased the contrast of the picture to make her features a bit easier to see. Ruler is included for scale.

Better gloves (with synthetic water proof fabric) would have prevented all the snow stuck to my hands that made creating her face almost impossible. I would have loved to make her ears and nose differently, but I am satisfied with my first attempt.

I made a second snow guinea pig for my Abyssinian guinea Cola.

Here she is in snow:

She has paper plate ears, Oreo eyes, and small animal flavored chew sticks for nose/mouth. You can see my red snow encrusted gloves on the ground next to her, abandoned while I took pictures.

From the side, with ruler for scale.

Here is a close up of her face and front paws.

It was much easier to take pictures of Snow Cola as she was more in the sun and my attempt at making her look furry gave her more definition from her snowy surroundings.

Have you guys ever made any snow animals or sculptures? It was really fun and I would love to try making bigger and better pieces next time we have a lot of packing snow.

Well, where I live we are supposed to be getting a blizzard tonight into tomorrow. So far there is only a little wind and snow – so we shall see. But in honor of winter here are puppies enjoying the snow:

Sleepy puppies in the snow:

Puppies playing in it:

There last two are my favorites:

Can you still see me?