So today I happened upon an article on boing boing that explained there are thousands of rabbits at British Columbia’s University of Victoria.

Apparently the number of bunnies is due to people abandoning their unwanted pets on the campus and their numbers have simply grown over time due to breeding, continual abandonment, and people feeding them. These rabbits are now ferral, and are not pets.

The campus has launched a public awareness campaign in an effort to protect the rabbits, people, and the environment. Having so many rabbits in one place is a stress to local plant life and can cause health problems for people. The goal is to stop people from continuing to abandon pet rabbits on campus, stop people from feeding the bunnies, and to prevent animal cruelty.

To read more about the rabbits on campus and what they are trying to do to help both people and the rabbits, visit Rabbits @ UVic.

Here is a video of a man feeding the bunnies that shows their interest in people, and an idea of their numbers:

Here are a couple of photos: 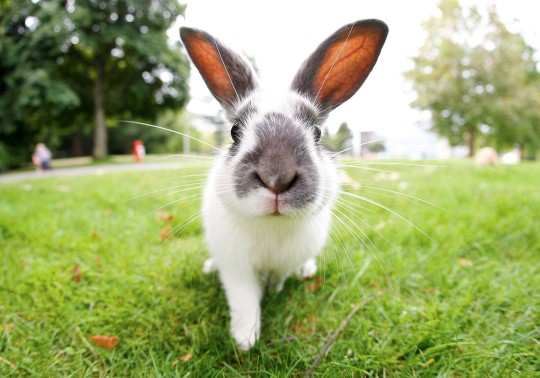 Photos from theglobeandmail.com: by Deddeda Stemler.