So I read Twilight, because everyone was doing it, and I hated it! Thus I have never seen the movies. But, when I found this today on tumbler.com, from STUFF I LIKE. and you might too,  I had to post it right away.

I apologize in advance to all Twilight lovers, but this picture made me laugh really hard: 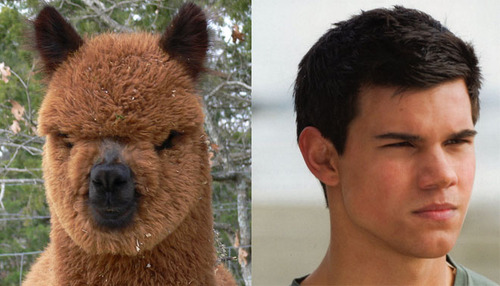 I think the resemblance is hilarious!

Edit: From the response I have gotten to this post I guess I have to clarify some things.

I apologize, given current pop culture I thought what I was referring to and who was pictured were obvious. I refrained from naming him in the first place because my purpose was not to draw specifically Twilight fans to this blog and then get derogatory comments, but I got derogatory comments anyways for “forgetting my readers.” This was not my goal as I thought Twilight was something people knew about, or at least would find the guys resemblance to the llama funny.

Twilight is a book series, by Stephanie Meyer, that is incredibly popular at the moment about vampires and werewolves. It was recently made into rather poor movies, and this is a a picture of a llama next to one of the  main actors of the film. His character’s name is Jacob Black (who is one of the werewolves), the actor’s name is Taylor Lautner.

So again, I apologize for any misunderstandings and I never meant to upset my readers or confuse them.